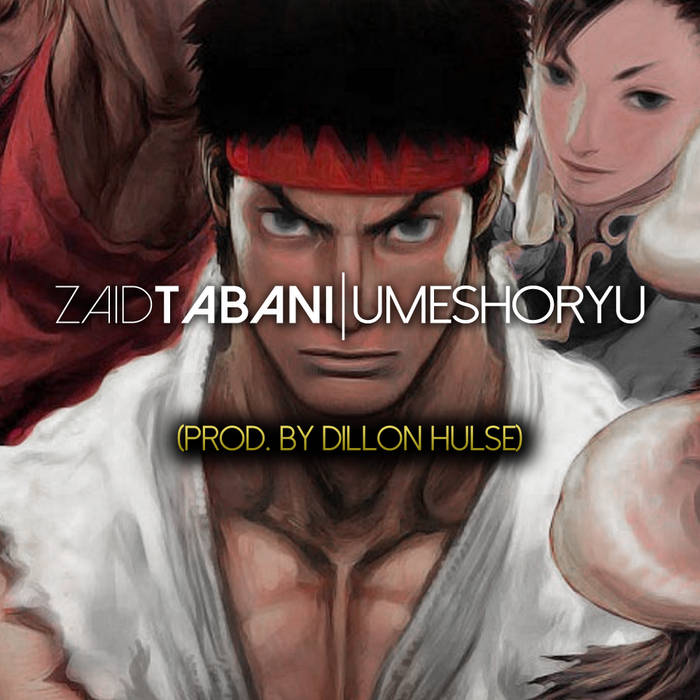 Alphacruxer This track is just badass! One of the best workout songs out there that makes you feel like a legend while you train yourself.

Alrighty FGC: Here's something to get you pumped for EVO! New Track: Umeshoryu!

Originally started out as a theme for Daigo and we were pitching it to people, but we got delayed in finishing it(like other things...) and I also wanted more freedom with the language I was able to use haha. But yeah, it's got a fresh beat from Dillon Hulse and some cool little flourishes(like me rapping in 7/8 at one point) and few cool metaphors FGC fans can enjoy. But again, the song isn't only limited to fighting game fans, I wrote it so that if you've never played one of these games in your life-- it's just something to inspire you. Or get you hype.

So another thing: This is going to be my last FGC music release thing for a while. My priority right now is kind of my own music, and I've been doing a lot of it! There's plenty on my channel for you to check out, and I'm releasing a new mixtape and a new album and stuff soon. Also, if you're in the SoCal area-- I'll be performing Live next week Wednesday-- and you can get tickets to that here: redrapper.bandcamp.com/merch/zaid-tabani-live-with-band-chain-reaction-july-16th

So please, if you liked any of the stuff I did for the FGC, take a look at some of my songs like "Parker" or "Risk". I' think you'll enjoy them!

For everybody who's been cool and helped me out along the way, I wanted to say thank you. From James Chen, David Philip, Alex Valle, Daniel Tam, Chris Li, Mike Watson, Justin Wong, Monty Oum, Terry Ng, Esby Rosas, Jon from Jon EventHubs, Adam Keits Heart, Mike Ross-- everybody who's really supported me-- thank you. EVO staff, Seth Mussey, Tom Cannon, Tony Cannon, Seth Killian, Joey Cuellar(even though I'm pretty sure you're still a little angry with me), ya'll are awesome. Everybody who's been cool enough to txt me, or message me on XBL and let me know they love my music- you've kept me going. SO thanks.

Hope ya'll enjoy it! And I'll see you guys soon! Have a great EVO!

My Last fighting game song for a while. Produced by DIllon Hulse. Was originally gonna be a Daigo Theme Song but I switched it up a bit. HAVE A KILLER EVO!
I'm the definition of uppercut,
NEVER GONNA GIVE A FUCK,
I carved the world into something you could never touch,
I'm the season of pain, shot into the stem of your brain,
I defined the top tiers by competitors slain,

I'm the insane refined by the hype of wind change,
You can hear a death bracket by the whisper of my name,
I blast people to ash, you could check at the math,
less you wanted a bloodbath splattered into the runback

I'm the cause of the reckless ascent, (attempt
I'm the bar measured on record, just to credit events,
I invented the plateu's that you'll never prevent,
I shatter defense with sense, at a hundred percent, (second attempt)

I am magic, to the flow and the trick of the blue flame,
My height decides(defines) giants, with a flick of a wrist made,
You aint never gonna hit where the tip of my ink stains,
Soon as I feign battle and the pitch of my fist swings,

Define the kingdom, my legacy is consistent, with anybody convinced that my intricacy'd missed em,
They thinking that my description exaggerated as a fiction, is wishful, I came body precisely as an incision,
And anybody who says my abilities aren't conditioned have never seen my conviction, to battle ever collision I switch in,
I will travel any distance to battle a cataclysm,
I knew the very instant, you stepped in my radius with,

Nothing bring to it, 1/60th of a swing to it,
Ima hit every frame like I designated and cling to it,
Imprinted I think fluid, every movement improvement,
I know everything that you thinking before you can even do it

I seaking power my hour is on rise, my desire still in prime,
I'll inspire every mind to devour every divide AND scribe their name in the cliff, as soon as they can collide,
I'm a fireball and rhyme combined,

I'm the definition of a uppercut, never gonna give a fuck,
I am the energy of a legacy sent to me running through my blood,
I live for the rush I desire I can inspire,
I shatter dragons to fragments and ash a demon to fire,

There's nothing else I require but competition, to wire an opposition
I'm higher and more efficient than tired new premonitions that sire the inability wished that I give in,
I'm warrior, battle the age I live in,
Cause this is my

Intuition, you consider every decision
Augment every entrance with tenseness till it's diminished
I'll risk it, over my wisdom, I know what I am, this is,
moment I stand brilliant, my hype cause I am iller,
any militant, vigilliant obstacle trya kill my momentum,
with venom, I was destined to be a legend the minute,
I set my eyes on the present wishing my mission would live in
second you called me reckless because you knew I was different,

topple empires using palms, staying outta my shadow theres fire left in my arms,
ain't nobody can harm what I built from scratch in so long, but the world keeps telling me fuck you and I don't what they on,
ya'll believe in mistakes, and I never believe in wrong,
I only swing at giants to shatter them at the jaw,
tryna take off your mask so no matter how hard you claw, I'm too far to reach when I draw, knockout everybody in charge

I ain't ready to budge, I've been going in hard, You walking into my pathway, and I'ma tear you apart,
and if I have to restart, then Ima bury the scar in the back of my mind just so I can just use it feuling my mark,
You always say it's a game, well I consider it art, you only win if you want it, you only good if you smart,
so I build up my bars, so the second I spark, I discharge my arsenal sharply, to bombard whatever you guard,

Infinite and invincible, ethic is never questioned, I'm impressive in my impression, to inventive and fundamental to exit,
I'm too effective, so tell me who's next and soon as I step on a stage their ability is arrested,
I been tested since the minute I entered, people who telling me I ain't centered, to rep it, my flows as defensive as it is a weapon,
taking a breath for breathless, I'm never contested, you lack the direction, while I auto corrected, so check it,

I'm here to try finish it, tryna kick a synthesis, possible or limitless, ya'll been spitting ignorant,
villanious equivalent, 7 of eight instruments, killing it, I'm the significant new antithesis,
of every odd against me, omnipotent
never give in to doubts, I only aim for the greatest, my only rivals the destiny I myself have created
I've only waited for patience, I'm taking over ages, Why print my name onto history, I'll exist as the pages,

DEFINITION OF AN UPPERCUT, NEVER GONNA FUCK,
I AM ONLY MOMENT, AS POTENT THAT YOU CAN NEVER CRUSH,
I'MA THE REASON, THAT EVERYBODY BELIEVES IN,
THAT YOU BUILD A CHAMPION, OUTTA PASSION, YOU FEED INTO A RUSH

I'MA LIVE IN THE CLUTCH TILL EVERYBODY ERUPTS,
AND ANYONE HERE TO STOP ME IS NEVER GONNA BE ENOUGH,
I'LL DECONSTRUCT ANY OBSTACLE, TRYNA INTERRUPT,
MY CONDUCTION, TILL THEY COMBUST AND THE HYPE'LL JUST SELF DESTRUCT

AND I'M ALREADY ON MY OWN, BUT I BEEN HERE FOR IT ALL,
THEY FARTHER YOU WANNA TAKE IT, THEY MORE THEY WANT YOU TO FALL,
Ima keep my resolve, AND OBLITERATE EVERY WALL THEY INSTALLED,
TO A FAULT, AND LET ALL OF MY FEARS DISSOLVE AND EVOLVE,

I'ma live in streets, over every beat I defeat,
and compete against the impossibles, just show my belief,
with only technique,
till they advance,
I'ma battle the world, till yall gon know who I am,
umeshoryu